Funded by the QSAP and the Italian Ministry of Cultural Heritage and Tourism, the Mut Temple Conservation Project has so far focused on aspects linked to preventive conservation. This has involved setting up provisional measures to safeguard the temple’s vestibule (Chamber A), as well as scientific research and restoration work on the wall paintings in the main chamber (Chamber B).

The temple was partly built into and partly excavated from the sandstone face beneath the pinnacle of Jebel Barkal. It was erected by King Taharqa in the 7th century BCE — at a time when the pharaohs of the Kushite dynasty ruled upper and lower Egypt — and dedicated to the goddess Mut, the wife of Amun, who took on the dual identity of the goddesses Hathor and Sekhmet. The temple of the Napatan era consists of a central hall flanked by two smaller chambers, with a vestibule that is accessed from an area marked by two rows of four columns — the hypostyle hall — and is preceded by a colonnaded portico. The structure reuses part of the colonnade of a pre-existing temple of Mut built during the New Kingdom (13th century BCE). The columns topped with ’Hathoric‘ capitals, still visible on the outside, and documented in sketches by several travellers and scholars who visited the site during the 19th century, are part of this structure.

The American archaeologist George Reisner (1867–1942) carried out the first archeological investigation in the temple in 1919 (scheduled as building B300), after which provisional works were carried out to protect the vestibule with the reconstruction of the two walls marking the entrance.

So far, there have been four archeological campaigns conducted thanks to an agreement between the National Corporation of Antiquities and Museums (NCAM) of Sudan and the Institute for Conservation and Restoration, Rome, in the years 2014–17. In addition to establishing the methodology to be used for the restoration of the paintings, the following actions were undertaken during the campaigns: the restoration of wall paintings on the west and east sides of the main chamber; a new temporary covering on the vestibule as well as a new side access to limit climate exchange with the outside; establishing a static support system to safeguard the vestibule ceiling, much of which had collapsed; and finally, the displacement of some of the major collapsed blocks in the vestibule.

At the same time, archaeological investigations were conducted on the original floor levels of the vestibule, which were covered by large collapsed blocks and ceiling rubble, as well as outside in the hypostyle hall, aimed at clarifying the relationship between the original plan and the bases of the columns.

The restored paintings on the two walls depict mirror images of the pharaoh Taharqa handing offerings to Amun, followed by Mut, Khonsu and two other deities: Min and Horus on the west wall and Monthu and Thoth on the eastern wall. The figures are accompanied by hieroglyphic texts and are painted in yellow ochre and white kaolin with details in red ochre and black on a background painted in Egyptian blue. The scenes are framed at the top by decorative bands with spearhead motifs and small colored squares, like a chessboard. The paintings have been executed with a dry technique, a so called ‘tempera‘ on a thin layer of gypsum-based mortar, and one made of gypsum and kaolin. The figures were carved with a bas-relief technique in the main chamber; elsewhere, they were simply cut into the rock. 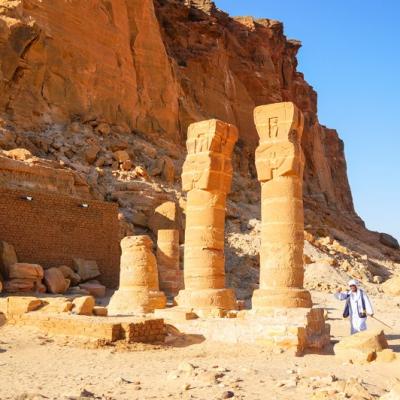