The archaeological area of Sanam consists, at present, of a temple dedicated to the god Amun, a large building called the ‘Treasury’ and several other buildings of considerable size used for administrative purposes. One of those buildings, scheduled as SA.K 300, was a workshop where a large quantity of interesting items, including Egyptian storage jars, amulets, ivory fragments, green feldspar, alabaster, Red Sea shells and corals, together with a variety of tools for cutting stones and faience, were found.

Sanam, located on the eastern bank of the Nile, just in front of the sacred area of Napata (Jebel Barkal), must have been an important centre of trade – an essential node in the economic system of the kingdom. This was the landing point for boats connecting Napata with Kawa and beyond. Caravan routes that came from the southern regions and the Red Sea coast, through tracks known only to the nomadic peoples closely linked to the kingdom of Kush and its capital city, also ended here.

During the last three years the joint Sudanese-Italian mission has been included in the QSAP and, with its support, has been able to bring to light and restore three of Sanam’s buildings, rich with history and precious information from the past. The Sanam site provides us with the opportunity to understand and reconstruct a unique settlement characterised by buildings created by the kings of the 25th dynasty, when the Kingdom of Kush had reached its maximum power. We know that the Treasury and building SA.K 300 were constructed by the pharaohs Piankhy and Taharqo and remained in use until the reign of Aspelta, who ruled the Kingdom of Kush from about 600–580 BCE. During Aspelta’s reign the buildings in Sanam were burnt down, probably after a raid by the Egyptian pharaoh Psammetichus and then abandoned.

This disastrous event may, in fact, have frozen in time a particularly interesting historical moment. It is probable that once the buildings had been abandoned, the population stayed on living along the banks of the Nile in a humbler way, as they were no longer involved in international trade, since the seat of power had moved further south to Meroe. This is what we see in the Amun temple where irregular brick walls were built to subdivide the large rooms for purposes other than worship. We can see similar modifications made to a substantial building (SA.P 500), where excavations started during the 2017 campaign.This was certainly an imposing structure (60 x 40 metres), with perimeter walls 1.8 metres thick, and floors made of white sandstone slabs. It would appear that during the Meroitic period its large spaces were subdivided into smaller units, most probably repurposing the building for a different use.

During the same campaign a geophysical survey was carried out that enabled the archaeologists to define the urban landscape and the relationship between its various buildings. It is the aim of the mission to restore what has been excavated up to this point and make available to the public this unique example of urban architecture. 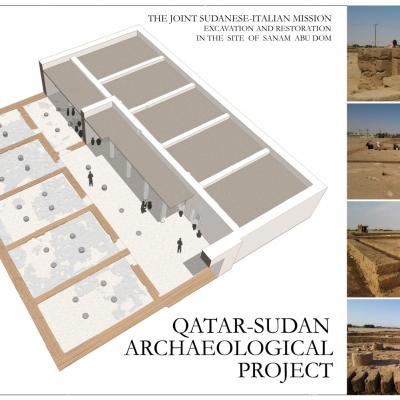 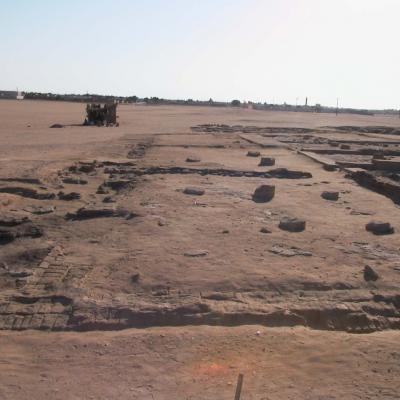 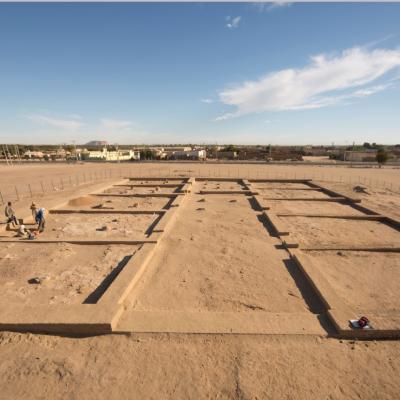